17 October 2017
Emma has received an order totalling over eleven million dollars from National Factory for Safety and Security Products (NFSSP) in Abu Dhabi.

Emma has received an order totalling over eleven million dollars from National Factory for Safety and Security Products (NFSSP) in Abu Dhabi.

The Dutch shoe manufacturer has received an order amounting to over 11 million dollars from National Factory for Safety and Security Products (NFSSP) in Abu Dhabi, the capital of the emirate Abu Dhabi and of the United Arab Emirates.

It is the largest order in the 86-year history of Emma. The three-year agreement was signed today [17 October 2017] in Abu Dhabi by the CEO of NFSSP, Majed Abdul Aziz Albakeri, and Tom Hermans, managing director of Emma, in the presence of the Dutch ambassador, Frank J.M. Mollen.

Besides offering knowledge, experience and guidance in Abu Dhabi , the order will involve Emma in managing the purchase of materials including the shanks, customs documents and the entire logistics process (‘supply chain’) for the production of 375,000 pairs of ‘army shoes’ (desert boots). “Starting with 150,000 pairs in 2018”, confirms Tom Hermans. The actual assembly of the boots will be done by NFSSP, in its modern equipped shoe factory in Abu Dhabi.

Contact began between Emma and NFSSP at the end of 2014. Emma has since designed a variety of models for NFSSP, including officers' shoes for men and women and 8000 pairs of boots for the Abu Dhabi air force. Hermans: “Early this year we were asked to develop a special desert boot. Meanwhile this boot has been tested under extreme desert conditions by the army in Abu Dhabi. Apparently to their complete satisfaction, as we have now received this contract amounting to over eleven million dollars.” The top man at Emma sees the ‘Abu Dhabi order’ as the start of even more foreign assignments. In 2016 Emma won a large order from Kuwait Oil Company. “At the same time we continue to protect our market leadership in the Benelux”, stresses Hermans.

Emma Safety Footwear (180 employees) has been producing safety shoes since 1931. In 2017 its annual turnover was around 22 million euros. Emma is currently busy moving in phases (from Brunssum and Bunde) to a new, 6 ha industrial site in Kerkrade (Tunnelweg 104, Bedrijventerrein Dentgenbach). Meanwhile the Distribution department is already fully operational on the new site. As from 2018, employment levels will grow at Emma by tens of workers. 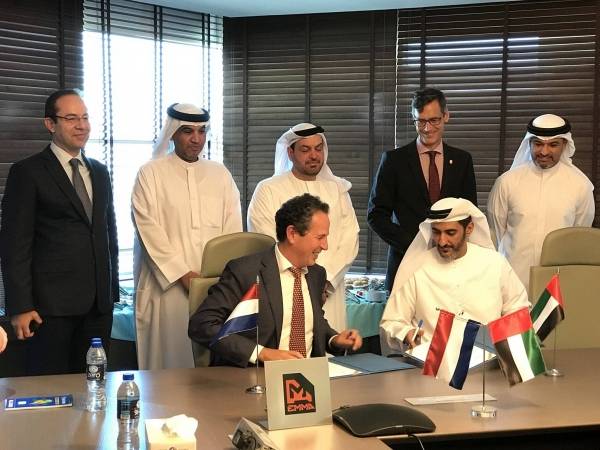